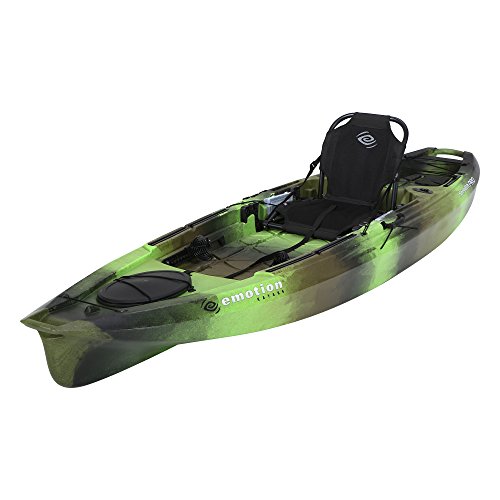 The Stealth Pro Fishing Kayak comes from a long line of great plastic hulled boats from the manufacturer’s Emotion. This kayak has proven a popular choice among anglers for the last few years since the boat was released to the general public in 2016. As such this can be attributed to the excellent choice of materials chosen by Emotion and the overall design of the kayak being spectacular.

The kayak at 12ft is a monster and while on test you really get a feel for the size of it. The thing is more of a barge than a kayak which is perfect for anglers. As it provides options with regards to standing, sitting or even walking about on the Stealth Pro. This is obviously down to the vast space created from the kayak being a sit-on-top type but take nothing away from the ingenuity of the design team at Emotion. Who has managed to squeeze plenty of space into the center console of the hull of the kayak?

As such this review will discuss the underlying factors of why this kayak has been such a big success and why we feel it is a must-buy for the 12-foot category of kayaks. Below you will see we have outlined the key specifications of the Emotion Stealth Pro Angler Kayak and found further down is the key features that the kayak provides users

The Emotion Stealth comes in a slick toxic green to black fade which is very unique and not something we have seen before. The colors fade from one to another along with the kayak. The paint used is UV resistant to prevent the sunlight affecting the other all color of the hull.

Speaking of the hull it is made from polyethylene which is both fracture-resistant and durable. It is used widely among kayaks though the compounds can vary. It is relied upon as it has the properties that it will absorb and re-distribute the energy generated from collisions around the hull of the boat to prevent cracks or extensive damage.

The shape of the kayak caters to the angler in that it is a wide design, this assists in providing a superb amount of stability while out on the water. This stability does translate for different areas as we found the kayak to perform well on calm lakes and rougher waters. However, we do recommend that it is used for lakes and slow-moving river fishing as it is better suited to this style.

The Stealth Pro is surprising maneuverable while in use even when considering it has a relatively snub-nosed design. This is helped by its comparatively lightweight build and smart use of materials. Everything you will find on this kayak will have a purpose and as such will be utilized consistently. No frills, no bells, and whistles, just a good honest kayak with the necessitates needed for a day out angling on the water. 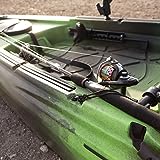 Emotion has made great improvements in its standard edition of this model to the point where the Pro version is just spectacular. They have now included six YakAttack gear mounting rails to the hull of the kayak. These sections are all 12 inches in length. Two are located on either side of the kayak just in front of the seat position with one located either side of the stern tank well.  These provide the end-user with a copious amount of opportunity and designs in mounting gear from swivel rod holders to fish transducers. We at Bestkayakreviews.net would be disappointed if you somehow managed to fill all the track space.

Found behind the seat is two rubberized rod holders. These allow for rods to be secured vertically when either rigging a rod or while paddling in the kayak. We found these to be sufficiently secure and extra helpful when attaching flies and hooks to line.

There is also the option to place fishing rods horizontally, using the bungee cord at the front of the kayak along with bungee at the side of the seat. This allows for the rod to be secured even further than that of the rod holders and is flush placed parallel to the Stealth Pro.

Finally, it is worth mentioning that there is a really good amount of space located just in front of the seat. This means that standing is an option in this kayak if you do wish to do so. As we understand that sitting is not everyone’s preference. As such, the Stealth Pro provides both and this wide design has taken the standing option into consideration. 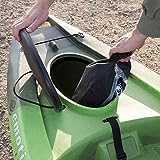 The kayak is a monster when it comes to space, Emotion has made sure to efficiently utilize every space on the kayak in order to maximize the storage capabilities on it. As such located at the bow of the Stealth Pro is a waterproof hatch that provides access to the hull of the kayak. This is the area is vast and could easily store 10 rods plus a rucksack there is just that amount of room. The hatch is waterproofed through the rubberized seal and is hinged as well to prevent loss of the top.

Found in the center of the is a large area dedicated for standing but don’t get it wrong there would still be ample space to place items between your legs while paddling. However, the crème de la crème is the tank well located at the rear of the kayak. The space offered by this is so generous. As found with many wells there are three scupper plugs to provide draining options but also the bottom of the well is rigged to prevent slipping.

The tank well is easily one of the biggest we have seen on test for this size of angler kayak and if this is something you value in boat then I would highly recommend this kayak.

As with many other kayaks, the tank well items can be secured by bungee tie-downs which provide a safe place to store coolers or other items that are too bulky for the front hatch.

All in all, this is a solid kayak, if you value storage and are looking for something that will be able to carry your burden. Then this is the kayak for you! Emotion is a no-frills company and rely upon a solid basis of practicality over functionality and to their credit the Stealth Pro has shown just why this is their mantra.