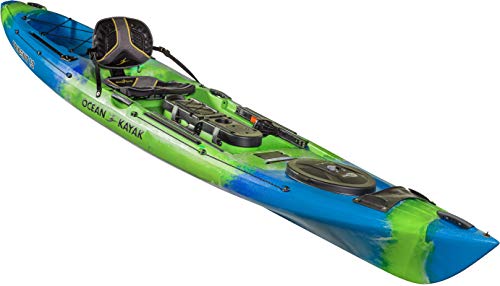 The Trident 13 is another popular kayak from the manufacturer Ocean Kayak. The company has a rich history of kayak building starting in a backyard in Malibu in 1971. The founder used an old surfboard and cut out two places of which one was to sit and the other was to store scuba gear.

As such, the company has gone from strength to strength replacing the fiberglass kayak design with the excellent rotomolded polyethylene. This provided Ocean Kayaks with a sturdy near unbreakable kayak at a price point which almost anyone could afford. To this day, Ocean strives to keep these traditions alive by building sturdy kayaks which are value for money to the consumers. This has served them well with the sale of 10’s of 1000’s of kayaks and is now seen as one of the world’s biggest kayak manufacturers for the sit-on-top style.

The Trident 13 is no different, it is a solid kayak with an excellent price point. Therefore, if you wish to read our in-depth review of the Ocean Kayak Trident 13 then please continue to read below.

Specifications Of The Ocean Kayak Trident 13

Design Of The Ocean Kayak Trident 13

The Ocean Kayak Trident 13 is a solid kayak in all the senses of the word. The use of Polyethylene as a hull material is a great choice due to its superior properties. These prevent cracks when the kayak may have a collision and tends to spread the impact across the whole of the boat instead of one small area.

The kayak is 13 feet and 6 inches in length resulting in a rather stable kayak. However, the boat is only 29 inches in width which is on the small side for kayaks of this size. Though, this is compensated by the ability to turn the kayak with ease on the water as the narrow bow and stern allow for it to cut through the waves. This narrow front end also provides for better tracking, speed and glide on the water when compared to other 13-foot kayaks. Thus, it does have the advantage of getting you where you need to be quicker than anything else.

Though with this slim amount of length the kayak does struggle in terms of allowing the user to stand up in the kayak. Thus, making it hard for the user to fish in different positions other than sitting which is disappointing.

But when you actually get to paddle in the Ocean Kayak Trident 13 you will realize why maybe a narrower kayak is the way to go as the speed and maneuverability is top notch. The kayak is unmatched in terms of its ability to break lapping waves when the sea is rough.

If this is not enough there is the option to attach a rudder to the rear of the kayak for better performance.

Features Of The Ocean Kayak Trident 13 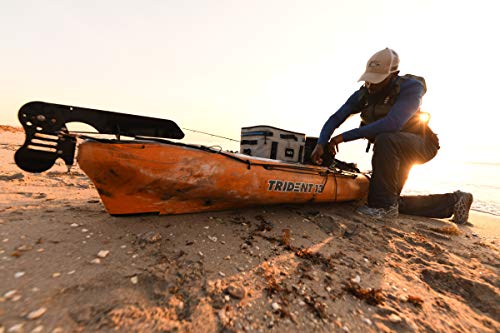 The Trident 13 has a whole host of features at its disposable. This can be attributed to years of innovation that the Ocean Kayak design time has come up with. Therefore, the Trident series remains popular for its vast amount of storage space and its great fishing and luxury features. Below we go into more detail as to what this kayak has to offer on this front.

This kayak is filled with all the features you would expect from a great all-round kayak. In terms of fishing features, it does meet the standard requirements and perhaps exceeds it.

Behind the seat, there are two flush-mounted rod holders for storing your rod while either rigging it or detaching a fish.

Just in front of the seat is the Mod Pod II which is perfect for place compatible fish transducers and tackle boxes or keys due its magnetic design plate. This storage space helps in ensure crucial items such as mobile phones and documents are stored in a waterproof area which is splash resistant.

The kayak also comes with a host of gear mounting rails which are ideal for individuals who utilize swivel rod holders or camera equipment such as GoPro’s. These are located either side of the rear tank well and also flush to the hull on either side of the seat.

Storage Options On The Kayak

There is one thing that Ocean Kayaks are known for and that is their great designs when it comes to storage. The Trident 13 is no different in this respect as it features a vast amount of storage options.

Located at the stern of the kayak is a massive oversized tank well which has two scupper holes built in to drain said area. Any items being stored in the tank well can be tied in via the bungee cord mesh which encases the whole area. This a monstrous space you can understand how big it is until you see it in person.

Found at the front of the kayak is a waterproof hatch this area is perfect for dry goods as the seal on the hatch is waterproof. Found inside the hatch is also a battery storage bag for the power of any electronics you might be running. The front hatch can be locked via a lever in the unfortunate circumstances where the boat may capsize.

The kayak is one of the comfiest we have had on tests and we hope so for the price point. The seat is cushioned and breathable all while being adjustable to fit the user’s posture. The foot braces have several settings and can be moved to meet the height requirements of the user. There are other qualities of life features such as vertical rod and paddle holders either side of the kayak and also rubberized carry grips to help in transporting the kayak to and from the truck or car. Finally, while mentioning transportation the boat also has a skid plate to prevent damage to the underside of the hull

In summary, this kayak is perfect for those who tend to fish in the sea rather than on lakes. The design does lend itself extensively to combatting surf and rougher waters compared to other all-around kayaks. As such if you wish for a kayak that has performed alongside an abundance of fishing features and quality of life options then go no further the Ocean Kayak Trident 13 is the kayak for you!