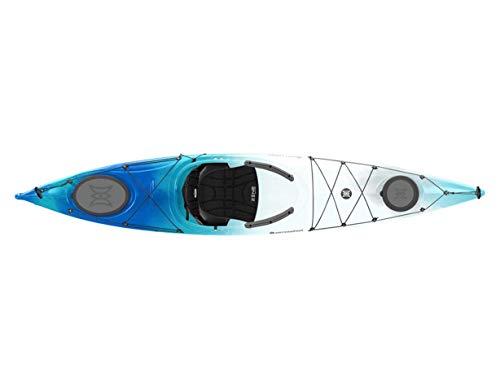 Perception Carolina 12 is a touring kayak produced with comfort, speed, and endurance in mind. As such this kayak makes the perfect companion for those that wish to go on many multi-day adventures out at sea or in the wilderness.

However, it must be mentioned that the Carolina is small for a touring kayak most are usually 14 feet compared to the 12 foot yak we are reviewing. Though, this kayak has all the stability of a 14 foot boat thanks to the design of hull Perception came up with. The V shape increases stability and helps with tracking on the water.

Therefore, if you are after a kayak with the agility and precision of a 14 foot touring kayak without the extra length and hassle of transporting it. Then please read our review of the Perception Carolina 12 where we go in-depth about the design, performance, and features of this kayak.

Design Of The Perception Carolina 12

The design of the Perception Carolina 12 lends itself to being very maneuverable within the water as you would expect from a touring type kayak. Its slimline shape combined with its excellent use of space has created an amazing 12 foot touring boat perfect for both day use and multi-day expeditions.

The sit-in cockpit allows for the user to paddle all year round as it does tend to protect you from the elements a lot better than that of a sit-on-top kayak. This would further be enhanced by the addition of a spray skirt which would further insulate the user while also keeping the cold and water out of the inside of the kayak.

Although, touring kayaks do sound very advanced and technical they have a very low barrier to entry as it is very similar to all other recreational sit-in kayaks. Thus, making the Perception Carolina 12 suitable for both amateurs and experts but we would recommend taking a course and learning some of the more technical maneuvers before taking it out onto the ocean.

As previously mentioned, the V-shaped hull does make the kayak very stable while out on the water and it also assists in making the kayak track and glide better. Though, if you do wish to have better control over the movement of the Perception Carolina 12 there is the option to purchase a rudder alongside the kayak. This would improve both the ease at which you can turn and the tracking of the kayak down a river.

The hull is made out of polyethylene similar to most other touring kayaks as it does have durability and if damaged it tends not to crack or puncture as easy as other plastics.

Features Of The Perception Carolina 12

The Perception Carolina does seem to have all the necessary features to make a good touring kayak as it does provide a cushioned an ergonomic seat in addition to dry storage for camping gear.

The cockpit seat is screwed into the kayak rather than molded result in a bit of extra weight as they had not chosen the latter. However, this does provide more options in terms of adjustability and better ergonomics. The seat cushions are thick and comfortable for extend periods of time as you would expect on a touring kayak. The foam does mold to some degree to the shape of your body which helps just that little bit.

The cockpit also has padding covering the entry point to the kayak cockpit in order to prevent scuffs to both the knees and legs of the user (a nice addition!).

It is also worth mentioning that the footpads are adjustable as well which can slide backward or forwards depending on the size or height of the user.

Also, this provides the user with a comfortable position in which to paddle for extended periods of time. The combination of all these features aid the user’s endurance and increase their performance while out on the water.

With the kayak being of the touring variety, storage can be limited. But Perception’s design team have done their best in trying to incorporate the best uses of space.

This starts with the dry hatch at the rear of the Carolina 12 kayak. The hatch is about 1/4 foot long and goes from the end of the kayak in from there. There is a considerable amount of space in this locker and is perfect for spare sets of clothing and other dry gear.

Just behind the seat, there is an area of mesh rigging which can be used to store camping gear items such as tarpaulins or other such items. It covers a decent area of the kayak and provides a relatively secure hold on items stored within it.

Similarly, an identical sized area of mesh rigging is found just in front of the cockpit this is bungee cord similar to back rigging. Which again provides a secure hold on any items stored within it.

Finally, at the bow of the kayak, there is another dry hatch found right at the front. It is slightly smaller than the rear dry hatch but this will be due to the fact that the Carolina 12 is 12 foot kayak.

However, it is still a decent-sized space and will be able to accommodate most items thrown at it. It is worth mentioning that due to kayak being 12 foot it does mean storage is compensated in order to provide easier means of transportation. However, if you do wish for a bigger touring kayak please have a look at our reviews on 14 foot touring kayaks.

The Perception Carolina is a mighty fine touring kayak. Although it may be smaller than average it still packs a punch. The agility and overall maneuverability of the boat is second to none and this can be attributed to the shape and design of the kayak. The V-shape hull along with the materials used gives a lightweight design that glides and tracks well on any type of water.

Although space is small it is enough in case of most and if it really is a problem then an add-on of a tow along accessory pack could be a great purchase. Thus, we would highly recommend this product down to both a great price point and the ease at which it can be transported. 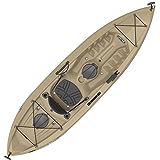