In case you hadn’t guessed from the name, a surf kayak is one that’s designed to be used on the waves! It’s not quite the same idea as the original surfboard though. The main difference between the two is that on a surfboard you’re standing up with no additional support, whilst on a surf kayak you are seated with a paddle.

At first you might think that being in a surf kayak doesn’t offer as much of an adrenaline rush as an original surfboard. However, you’d be very wrong. Not only can surf kayaking be an extremely exhilarating experience, it can be very dangerous too.

When in a surf kayak, the kayaker has a higher level of control over the boat as compared to a surfboard, mainly due to the fact that you have a paddle and you’re seated with a lower centre of gravity as opposed to standing up with no support. The great benefit of this is that you’re able to get a good long surf on a wave whilst in a surf kayak. Whilst this is of course possible on a surf board too, it’s considerably more difficult.

If you like the idea of a surf kayak and have decided you’d like to purchase one, choosing the correct one that’s within your budget and suitable for your skill level can be quite a tricky process. In this guide, we aim to clear up just that confusion. We’ll go through what you should look for in a surf kayak, what a surf kayak is, as well as reviewing those surf kayaks that we think are the best.

Surf kayaks are also known as surf skis. The characteristics of a surf kayak are very similar to a normal sea kayak. However, in order to be as streamlined as possible with minimal resistance to water, they are longer and thinner than typical kayaks. Surf skis also adopt the sit on top design, in order to avoid the inside of the boat becoming quickly flooded. Surf skis also have a rudder that can be controlled by pedals that allow the rider to control the boat as well as possible whilst they’re out hitting the high waves.

Aside from the main characteristics of the surf ski, you should know that there are in fact two different sub categories of the surf ski, these being ocean ski and spec ski. Ocean skis tend to be greater in length and depth than spec skis. Spec skis are typically used for safety purposes by lifeguards etc, whilst ocean skis are used more recreationally.

What Should You Look For In A Surf Kayak?

The Shape of The Hull – The shape of your surf kayak’s hull has a massive influence on how you are able to handle and control your kayak whilst it’s moving through the water. A kayak that has a long waterline (meaning that a lot of the boat is below the water as opposed to above it) are intended for slicing through the water instead of cruising on top.

A kayak that has a large displacement on its hull will also be more difficult to control on thw waves. A displacement hull refers to one that is shaped like a V. The V shape helps the boat to slice into the water. Whilst this is great for fast and easy cruising on calm open waters, it’s not what you want to see in a surf kayak as it will mean handling the boat whilst it’s more below the water, which is very difficult indeed.

Size/Volume Of The Kayak – When looking at surf kayaks, you want to be buying a boat that you can be sure is going to be lightweight enough and well-balanced enough to move easily around on top of the water, whilst on waves or in rougher water. This is affected by the volume of the boat. If the boat has a great volume it means that you’re going to be able to take a large amount of gear onto the boat and that the boat will be able to withstand a large maximum weight capacity. However, should these be the most important factors to when looking at a surf kayak? Absolutely not. You want a surf kayak to be light, nimble, and well-balanced so that you can control it as well as possible. 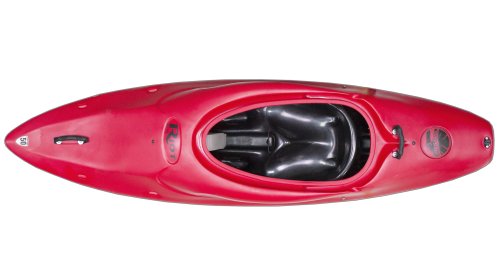 The Riot Kayaks Boogie 50 is a surf kayak that’s designed for taking on the waves in style. It’s a specialist surf kayak that exhibits the optimal characteristics for surf kayaking. The Boogie 50 has a plaining hull, which means that it’s flatter than normal on the bottom.  Whilst this isn’t a design that’s built for touring at speed, it’s great for a surf kayak such as this one as it allows it to move along the top of the water as opposed to slicing through.

As well as being a planing hull, the hull on the Boogie 50 also has a low rocker line and is very narrow. These combined, make a boat that can travel at great speed across the top of the waves. Other features of the boat include a very short stern and long front that’s very narrow. All of these allow the boat to accelerate and carve through the water at great speed and with precision.

Inside, the Boogie 50 is pretty spacious too. There’s plenty of leg room in the front despite the short length of the boat. A particularly cool feature on the Boogie 50 is the custom foam foot fittings. These allow you to get your feet and therefore legs secured into the boat nice and tightly, increasing both comfort and the control you have over the kayak.

At just over 36 pounds in weight and 7’9” in length, the Boogie 50 is very easy to move around. Unlike larger boats, the kayak may be easier to fit into the back of a truck or van. It’s very easy to carry due to its light weight and carry handles too. 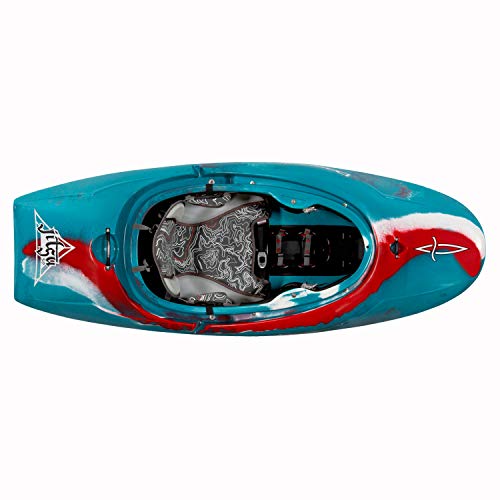 The Dagger Jitsu is another short kayak that’s designed as a playboat. It’s great for surfing the waves due to its fantastic agility and handling capabilities.

The Jitsu is only 6 feet long and is 27” wide. Due to the stocky nature of the kayak, it gives the boat great maneuverability. Not only is the Jitsu a fantastic design for surfing the waves with, but it’s also great for making small and accurate moves on the water.

In addition to being just 6 feet long, the Jitsu weighs just 38 pounds and is therefore very easy to move around, even when it’s not in the water. The kayak could be fitted into a car, pickup, or indeed a van with considerable more ease than some of the larger boats that are available.

The Riot Kayaks Magnum 80 is a polyethylene kayak that’s 8’4” in length and just over 26” in width. The Magnum 80 was designed for creeking, and is, therefore, an extremely stable boat.

Featuring a displacement hull, the Magnum 80 slices into the water. Whilst you might think the would mean that the boat isn’t easy to move around, handling is very well compensated by the high rocker (at either end of the kayak).

Whilst the Magnum 80 is great for use on the waves, it’s very versatile as it will also serve you well on harsher white waters such as fast-moving rivers

The Magnum 72 from Riot Kayaks was not designed primarily as a surf kayak, but instead as a whitewater creeking kayak. However, it still exhibits many of the characteristics that one might be looking for on a good surf kayak, which is why we’ve added it onto the end of our guide to the best surf kayaks.

The Magnum 72 is a great looking boat. Aesthetics aren’t its only good feature though. It’s kitted out with floating backrest that means you can get the support that your back needs wherever it needs it, easily. For further comfort, there’s also a contour fit that allows you to have the maximum possible movement of your upper body – perfect for paddling and riding those large waves.

To prevent the kayak from submersion, it’s fitted with floatation bags at both the front and back of the boat.

Whilst surf kayaking can be great fun and a very adrenaline-filled experience, there’s no doubt that it presents quite a variety of dangers to those that take part as well. In order to make sure that your risk of injury is as minimal as possible when you’re out on the water, you should look into getting some personal safety accessories.

A lot of surf kayaks will come with forms of personal protection included with them. Below are a few that we would advise as important to get.

Proper Floatation/Life Jacket – the reasons that a proper floatation jacket need not be explained. However, you should be sure that you do find one that fits you properly when you’re looking. A good life jacket should allow your upper body to move around easily whilst not being a loose fit.

Head Protection – A good helmet is another absolute essential if you’re planning on heading into white water and waves. Obviously, rocks and other hard objects are everywhere and pose a considerable danger should your kayak start veering towards one of them. A helmet that fits well is the best form of protection for your head in such a case.