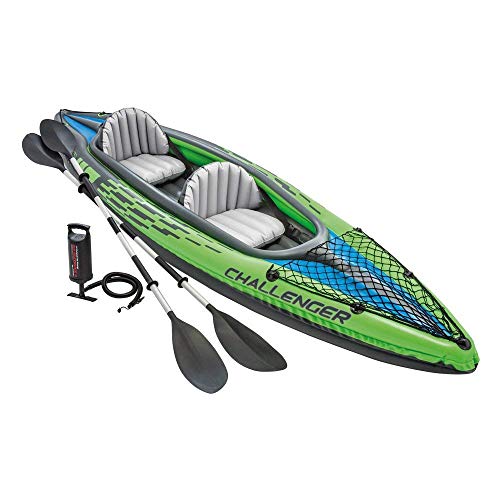 The Intex Explorer K2 is an inflatable two-berth kayak which is the perfect option for most recreational kayakers. The relatively inexpensive price point combined with the ease of transportation allows for this kayak to a wide range of users. Going from families for lake-side holidays to those which are unable to transport large 10 foot or 12-foot kayaks on top of their trucks or cars. As such the Explorer K2 is all about flexibility in the way that you both use it and also transport it.

Although many inexperienced paddlers seem to find the world of purchasing kayaks daunting this is not the case with the Intex Explorer K2. It’s intuitive instructions when it comes to the inflation process make it easy for anyone to complete.

Thus, this product does make a great product to those who are wanting to have the use of the kayak over the holiday period but do not wish for it to take up valuable space in the household or garage.

As such, for individuals with this situation please look no further than the Intex Explorer range we have reviews on both models (K1 and K2) so for more information please search within the website.

Before Purchasing An Inflatable Kayak

If you do struggle for space then an Inflatable kayak could be the answer as instead of purchasing a plastic hulled kayak an Inflatable which can be packed away may prove to be more practical.

As such they do provide users with the scope to travel with less equipment and a lot less weight when going to and from the launching site and their household. It also tends to be more convenient as gone are the days of having to load up and strap in the kayak to the roof of a truck or car.

Inflatable kayaks also benefit from being relatively inexpensive and this is the case with the Intex Explorer K2 as it comes in well under $100. Thus, if you were to hire a kayak for two days you would be able to purchase this kayak along with a paddle!

We understand that this style of kayak is not for everyone but if you are after a recreational kayak which will see use two or three times a year. Then please go ahead and read our review on the Intex Explorer K2 kayak! 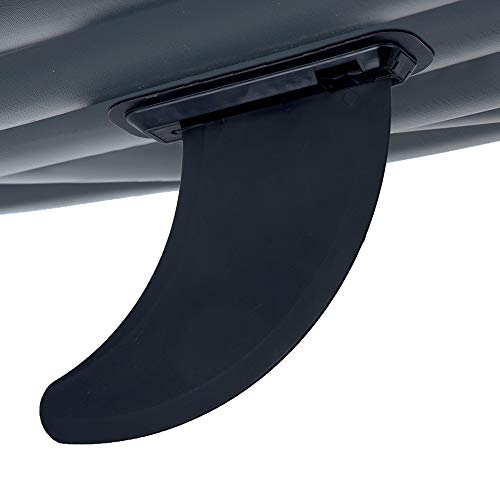 The Intex Explorer K2 kayak is a recreational inflatable kayak with a great design that promotes easy use and transportation. The kayak features several design elements that helps ensure that it performs well on the water.

This starts with the lightweight yet rigid design of the kayak’s rugged vinyl. This vinyl is thicker than other brands to ensure that scuffs and scrapes that occur are prevented from turning into punctures.

This rigid design is further improved through the use of an inflatable I-beam on the floor. This additionally gives the users enhanced comfort while paddling.

It is worth mentioning that contained within the Intex Explorer K2 box is a puncture repair kit which is a nice addition as you are able to repair the kayak on-site without having to front any extra cost.

The kayak also features a removable skeg which helps in improving the tracking of the Intex Challenger K2. We would recommend using this wherever possible as with double the users the direction of the boat is more likely to be skewed. Thus, the removable skeg ensures the tracking with two people is acceptable.

The inflation and deflation of the kayak is a relatively simple process. It involves using the hand pump for each side of the kayak and will take you a maximum of 5 minutes per side. On either side of the hull there are Boston values that make attaching the nozzle of the pump a straightforward process.

It is then time to put those arms to good use and inflate the kayak. If this is too strenuous then there is an include high-pressure pump that could be used via the electrics of a car. Similar to that of a tire pump.

This is a great inclusion and considering the convenience and the relatively low cost of the Intex Explorer K2 it is wonderful add-on to the overall package.

Deflation is an even easier process as it consists of turning the Boston value open so that the air within the kayak is allowed to escape. You can then fold up the kayak and pack it away and place it in the trunk of your car!

Within the Intex Explorer K2 package you receive two 86-inch oars that are made from lightweight aluminum. These perform as expected for the price of the kayak and as such we would recommend investing in a new set as they do feel flimsy in rougher waters.

However, for use on calm lakes providing that you are paddling at a gentle pace, there is no reason why these paddles will not complete the task at hand.

Is The Kayak Comfortable?

Although being an inflatable kayak and not having regular cushioned seats. The Intex Challenger K2’s are surprisingly comfortable. They are also inflatable and sit one behind each other within it. They provide a decent degree back support and are cushioned via the air inside. However, there are no footpads and therefore finding a comfortable position for your feet can be troublesome.

Other Features Of The Intex Challenger K2 Kayak

How Does The Kayak Perform? Summing It Up?

Overall, considering the price point and who this kayak is being marketed to, it definitely fulfills its purpose. Providing easy transportation and inflation options to the end-user. Although, being an inflatable kayak, you would think that it does lack the speed of a normal sit-in you would be pleasantly surprised at both the tracking and the glide of the Intex Challenger K2. As such, we would recommend this to those who are going on a family vacation and are needing only limited use throughout the year. The price of the kayak is the equivalent of two daily hires and as such is a steal at its current price!