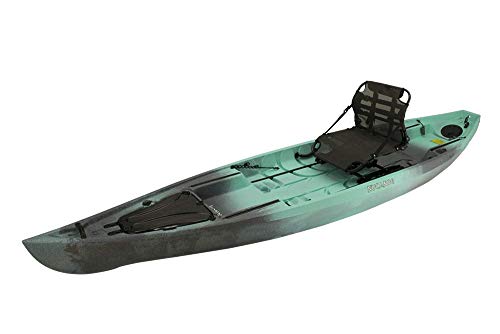 Are you someone who values a simplistic design yet the functionality to match then please take a look at our review of the Nucanoe Pursuit Fishing Kayak. This 13-foot kayak is an absolute monster of a fishing machine it more unless unmatched in its category.

Although this kayak is long it is still very much wide at 35 inches giving the user the needed stability and balance while out fishing on the water.

The Pursuit is a crazy kayak some may say by looking at it and they may ask why is this not a two person kayak. Well, the design team at Nucanoe realized that many anglers value space to stand within their kayak and as such built something which caters to such an audience.

However, although I said this wasn’t a two person kayak with the capacity and the space of the deck I would comfortably say it is possible to fit a child seat in front of you so do wish.

Thus, If you are after a solid fishing kayak with all the bells and whistles needed to get the job done then look no further than our review for the Nucanoe Pursuit Kayak.

Specifications Of The Nucanoe Pursuit

Design Of The Nucanoe Pursuit

The Nucanoe Pursuit has been built with two things in mind speed and stability. Although speed isn’t a necessary factor when it comes to fishing kayaks most paddlers will not turn this down if they are given it. As it allows for them to get to where they need to be in a timely manner meaning more time fishing, less time paddling.

The kayak is designed in such a way that it does lend itself to being fast in the water. At 13 foot, the kayak is not small, but Nucanoe has compromised by streamlining the front end of the kayak to increase its speed. The design means that it cuts through turbulent waves well and when starting to paddle it gets going quick and stays going.

With the size of the kayak, it does track well and this is aided by the hull design and the shape of it, though we feel the addition of a controllable rudder system would further help the maneuverability of such a big kayak. Overall though the kayak is very agile for the size and is a great bit of engineering on the behalf of Nucanoe.

With the kayak being so lengthy, this does give the massive bonus of extra deck space providing both comfort and flexibility. This gives the user plenty of room to move about and not be scared to drop something in front of them. As the chance of tripping over things are severely negated due to the large space.

Alongside this, Nucanoe was smart and realized that the slip possibility when the deck is wet has increased so they added the extra safety feature of anti-slip padding.

As previously mentioned, there is enough room on this deck to make room for a small child’s seat which would not compromise much of the space available and we would recommend it if you do have children.

Comfortable Seat To Rival Any Brand

This seat is an absolute joy to sit on, it is spacious and comfortable to the point where we felt like it should be taken into the living room on occasion. The seat has a host of features in that it can be set at either a high sitting position or a low one. It can be moved forward or backward on two rails either side of the decking to suit the user’s taste. When not in use the seat can be collapsed to make transport the kayak easy as it can take up a lot of space.

You should also note that the kayak does come with adjustable foot braces which again add that extra bit of comfort that other comparative brands may lack. Nucanoe really has created something to behold in the 13 foot range.

The Nucanoe Pursuit comes with all the usual features to be included on an angler kayak. These include the standard fishing rails which can be found on either side of the hull. These are ideal for mounting different accessories for angling such as swivel rod holders, camera accessory mounts or fishfinder transducers.

The Pursuit also has horizontal rod storage when traveling on the kayak. This is secured via a set of tabs which ensure the rods aren’t going anywhere. This storage area is capable of holding up to four rods at a time.

Storage Features Of The Nucanoe Pursuit

The Pursuit from Nucanoe has a wide range of storage features from the bow hatches to tank wells it has it all. As such, this kayak provides enough storage for a day’s travel anywhere weather dependent.

Found at the bow of the kayak is a rather large hatch which is suitable for most sizes of rucksacks or bags. There is ample room and the seal on the hatch will prevent water from coming into some degree. We do feel that this hatch could have been bigger but this would have sacrificed the front end design of the kayak, therefore, killing the speed of the boat.

Just behind the hatch is a relatively small tank well which is suitable for placing small things such as tackle boxes or rigs. However, it could double as a seat for a child if needed.

At the stern of the Pursuit is the massive tank well capable of storing anything you can throw at it including the kitchen sink. It is well within reach of the seat and is easy to get to if stand up as well. We found it to be the perfect place to store all your cold beers in cooler if needed.

The only thing that we found that could be improved on this kayak is the storage space itself for a 13 foot kayak you would be wishing for a bit more. But to be fair this kayak does make up for it in terms of its design being so streamlined.

If you require a beast of a kayak and enjoy standing while angling then look no further than the Nucanoe Pursuit. There is ample space to move around all while providing an insane amount of stability. We have found no faster 13-foot angler kayak and doubt we will ever. Storage space is sparing but with a few customizations, this could be solved with ease.