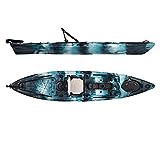 If you are looking for an all-inclusive kayak which performs to the highest degree then look no further than the Vibe Sea Ghost 130 kayak. This model produced and designed by Vibe is a beast of a machine combine exceptional performance with an endless list of useful features.

This kayak is as high-tech as they come with built-in fish finder transducer port and a center console that would make any veteran kayak angler envious of your transport.

The Sea Ghost 130 is suited to most fishing locations from rivers and lakes to sea-based fishing trips. This kayak will handle anything you throw at it and succeed like nothing else in the industry. Although it is designed with angling in mind it does perform well as a recreational kayak but it would definitely be suited for more experienced users due to the extent list of features attached to it.

Construction and Design of the Vibe Sea Ghost 130 Kayak

The kayak has been designed with care and expertises of the people at Vibe. This can be identified through the attention to detail of the Sea Ghost 130. The length although long for some avid anglers provides stability and extra storage options. This is further backed up by the width of the kayak which is one of the widest we have seen on test. This allows for the option of either sitting on standing when fishing. This can be a godsend to some people who like to change positions throughout the day.

However, as previously mentioned the kayak is long at 13ft and as such struggles when turning. But Vibe has realized this fact and have included an automated rudder system which acts similar to that of power steering. This provides the user with less tension and force in the arms when turning and as a result means increased endurance throughout long days on the water.

Vibe when designing the Sea Ghost 130 also realized the lack of separate compartments for different fishing gear as such the center console provides the user with organized storage options. Giving the OCD fisherman among us with the sanctity of mind when going out on the water that everything DOES have its place!

We have mentioned constantly throughout this review about the many advantages of the Sea Ghost 130 and how we have found it to live up to the hype. This does not stop with the fishing features found on board.

This starts with center console for storage which features waterproof and magnetic hatch openings to secure gear something we do not see often on angling kayaks.

Vibe has also provided the kayak with four top-loading gear tracks for mounting any fishing devices that you may use. This could include net holders or swivel rod bases.

If the gear tracks are not enough then found behind the Vibe Hero seat is two flush rod holders which are secured via rubberized pockets to prevent movement of rods.

The main difference we found in kayaks of a similar price range is that they failed to provide a space for a fish finder transducer. However, Vibe has answered the calls of consumers and have a built-in port with mounting points which can be attached and protected via a safety lid.

Finally, found on either side of the hull is the now-standard Vibe storage spots for two tackle tray holders. On the Vibe website, they suggest the PLANO 3600 tray as your optimal fit option.

A Wealth Of Storage Options

Leading on from the storage tackle tray options there is an enormous amount of other areas within the kayak to store all your fishing gear essentials.

For larger more bulky storage, the Sea Ghost provides users with a rear storage area which is big enough to fit most rucksacks or coolers. It utilizes bungee mesh tie-downs to ensure that the load is secured when paddling.

Finally, the piste de resistance is Vibe’s ingenious center console which provides those of us with gear organization OCD with the perfect remedy. The console features dual mini hatches which each have their own cargo bag, a cup holder, two top-loading tracks. All of the hatches are secured with watertight seals, hinged access and magnetic gear catches. This is certainly something very few kayaks can provide, a place for literally everything as one of our team said. This kayak is a beast of burden destined to carry anything you may throw at it. We are content in saying that it allows the price is on the high end the finishes and the attention to detail definitely do meet our cost estimations.

Comfort Of The Kayak

As with many of the other Vibe kayak range, the Sea Ghost 130 comes with the Vibe Hero seat which for us was one of the comfiest we have ever tested. You can set the seat to be both high or low in the kayak while also adjusting the backrest to achieve the optimal posture.

In striving to reach the ultimate amount of comfort for users Vibe also have installed adjustable foot braces similar to many kayak brands nowadays to provide those on either the taller or the smaller with perfect leg position while in the kayak.

In summary, this kayak lives up to our expectations, although large and difficult to maneuverer at times, Vibe has provided the kayak with a great external rudder system to increase user endurance. The Sea Ghost 130 provides an ample amount of storage options for which it should be able to accommodate gear for at minimum a three-day trip.

Thus, we would happily recommend this kayak to any experienced angler looking for a top of the range boat which will serve him or her well for the foreseeable future.